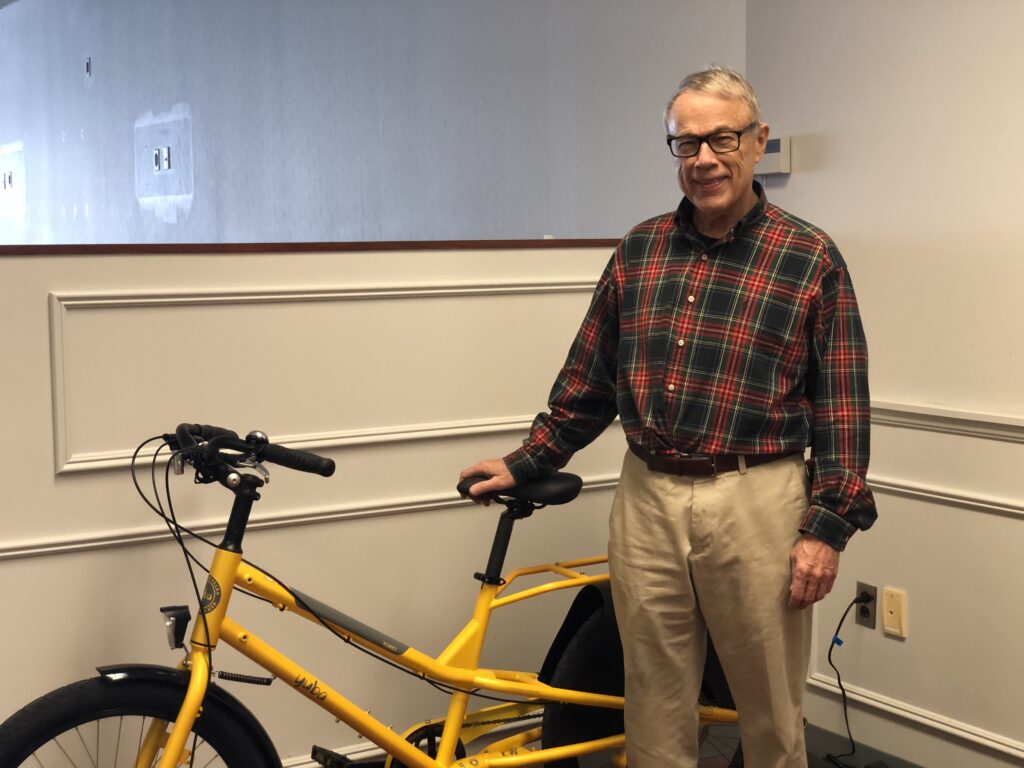 Russ is a retired publishing executive and was a founding partner of Firehouse Cycles in Yardley, Pa and Sourland Cycles in Hopewell, NJ. Twelve years ago Russ started the Trenton Boys & Girls Club Bike Exchange. The Bike Exchange is an all-volunteer effort that collects, repairs and sells donated bikes. The missions of the Bike Exchange are 1) to help low income families get decent bikes at low cost, 2) to raise money for the Trenton Boys & Girls Club, and 3) to provide intern opportunities for Trenton high school youth. Since its founding in 2008, the Bike Exchange has sold over 20,000 bikes and raised more than $1,200,000 for the after school programs of the Trenton Boys & Girls Club. The success and satisfaction of the Bike Exchange experience led Russ to found Princeton eBikes.  Along with his wife, Sharon, Russ has been cycling all over the world for 30 years.   Sharon got an eBike in 2019.  Since then, Russ and Sharon cycle together in the Sourland Mountains and throughout Central NJ.  Russ is an avid cyclist, but now Sharon is able to bike with him except on the hills where Sharon is now much faster.  Russ and Sharon typically bike about 30 miles leaving about 35% of the charge in the battery. Russ is especially proud of the team that has joined him in this effort to bring the largest selection of eBikes in the area (supported by eBike service) to Central New Jersey while benefiting the kids in Trenton. Russ, Theresa and Jay donated the funds for the Princeton eBikes start-up. 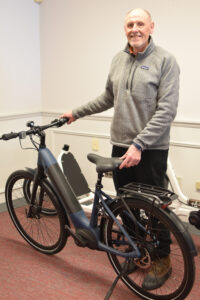 As a boy in Milwaukee, WI in the 60’s, Jay remembers riding his Schwinn one speed all over the south side of the city, most of the time without hands on the handlebars.  In recent years he is not so brave (or reckless) and prefers rides along the canal, or on occasion, with his friends on Princeton Freewheelers rides.  His interest in bikes and biking have been put to good use as a volunteer with the Trenton Bike Exchange, which devotes its proceeds to the Boys & Girls Club of Mercer County. Recently Jay has also developed an interest in electric vehicles of all kinds, including the purchase of an electric car.  His fascination in this area continues with electric bikes and he is proud to be associated with Princeton eBikes and its further association with the Boys & Girls Club.  Jay and Theresa with Russ donated the funds for the Princeton eBikes start-up. 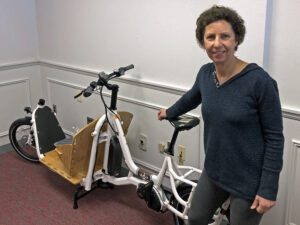 Theresa found her passion for biking among the steep hills of her home town, Ithaca, NY during her teenage years. She continues these endeavors with rides in hilly northwest Mercer and western Hunterdon counties with the Princeton Freewheelers and mountain bike riding in Utah.  In recent years she combined her love of biking with community involvement by volunteering time with the Bike Exchange and the Boys & Girls Club of Mercer County. She is excited to continue these efforts at Princeton eBikes. Theresa, Jay and Russ donated the funds for the Princeton eBikes start-up. 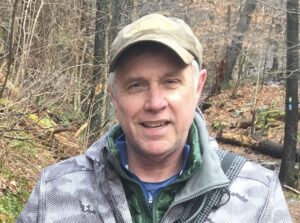 Scott doesn’t not remember riding a bike. His first “real” bike purchase was an old Peugeot that he found in a newspaper listing back in the day. It barely ran and he had to teach himself how to fix it. Since then he’s helped many family and friends get going on two wheels. His favorite bike is a Schwinn World Sport he converted into a single speed which he has used on bike tours around NYC. 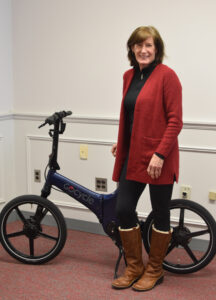 Barbara has been a member of the Princeton Free Wheelers for 20 years. Cycling is now a part of her life and has grown into a passion, spending many hours on a road bike with new friends. After retirement from a career in social services, she began volunteering at the Trenton Bike Exchange helping to coordinate bike drives with all proceeds supporting The Trenton Boys & Girls Club. She is looking forward to continued promotion of cycling and support of The Boys & Girls Club by volunteering at the new Princeton E-Bike Shop…..and checking out an e-bike ride! 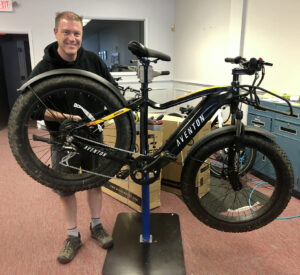 Brian has been working on bikes since he was in high school and has over 30 years of professional experience as a bicycle mechanic. Working his way up from basic service to full overhauls, he started at a bike shop in Battle Creek, MI in the 1990s. During his undergrad years he spent his summers working at a shop in Portage, MI. Fast forward to his grad school years and his wrenching skills helped put food on the table as he worked in stores in Indianapolis and Fort Wayne. In all cases, he worked on the retail floor, interacted with customers, and assembled and repaired thousands of bicycles.

Brian is an avid cyclist and enjoys BMX, road, and mountain bike racing, bicycle commuting, family rides, and bicycle touring. He does all his own upkeep on his own bikes and does everything he can to purchase parts and accessories from local businesses. Advocacy is important to him as well, and he is currently a member of Hightstown Borough’s Complete Streets Committee and a Trustee on the West Windsor Bicycle Pedestrian Alliance. Brian also serves as the NJ State Coordinator for the Ride of Silence. His philosophy is simple: he wants to get as many people on bikes as possible, and safety is the top priority. 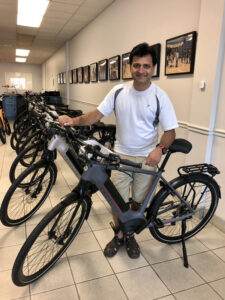 Vanshaj has loved biking ever since he was a kid and cherishes solo bike rides as well as rides with family and friends. He is volunteering with Princeton eBikes because he loves to give back to the community and contribute to the good work of the Boys & Girls Club of Mercer County. 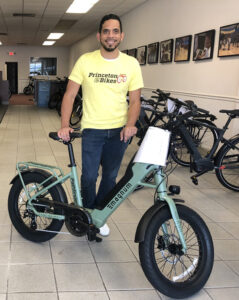 Carlos is the Partner Resource Director at Starbucks for the New York metro region and has a longstanding interest in bikes of all types. He’s volunteering for Princeton eBikes to combine his interest in ebikes and serving the community. 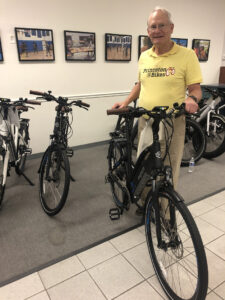 Hunt has been a casual bike rider most of his life. He discovered ebikes in 2018 on a bike/barge trip down the Poe River in Italy. He loved the ebikes – and the trip. He is also an environmentalist (as a long-time active member of Citizens Climate Lobby) and sees ebikes as a more climate-friendly mode of transportation than some fossil fuel alternatives. Because of the “green” nature of eBikes, he fully supports Princeton eBikes and the Boys & Girls Club of Mercer County. 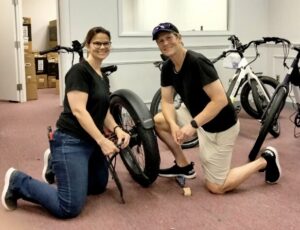 Amy and Jeff Watkins are avid recreational riders who enjoy cycling on wooded paths and coastal trails, especially downhill or with the wind at their backs. They want to bring that enjoyment to others and love working together to build new things. Volunteering at Princeton eBikes is a natural fit for them since their son also worked in several bike shops while growing up.