There is a joke told in transit circles about people who ride electric bicycles: How do you know if someone has an e-bike? They’ll tell you. The idea, of course, is that users of the battery-powered two-wheelers tend to be proselytizers for the technology.

The pandemic, he decided, was a good time to buy a RadWagon, an electric cargo bike from Rad Power Bikes, a top-selling e-bike company. Now, Mr. Paulsen said, he makes 90 percent of his trips on it.

“I started as a personal experiment to see how I could lower my carbon footprint,” he said. “I’ve stuck with it because it’s really fun.”

Princeton was recently designated the most “bike-friendly” town in the state. Presented with a silver-level Bicycle Friendly Community (BFC) award by the League of American Bicyclists (LAB) in December 2020, Princeton is one of only six BFCs in New Jersey and the only one in the state to attain the silver level. Read more about why we live in the best biking area in the state — and about Princeton eBikes — here

After paying overhead costs like rent, inventory, and utilities, the owners of Princeton eBikes donate all of the shop’s profits to the Boys & Girls Clubs of Mercer County.

The shop launched after Russ White approached husband and wife Jay and Theresa Wrobel about creating a new bicycle venture. 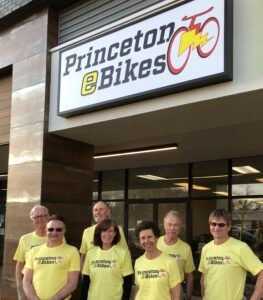 So, asks a drop-in visitor to Princeton eBikes: Is this a bicycle or a motorcycle?

Princeton eBikes founder and co-partner Russ White assures the man that despite its compact but formidable-looking electric motor and battery, and its assertive design (part curvaceous retro, part sharp-edged futurism) the device he’s eying — like all the others lining the recently opened store in the Lawrence Shopping Center — is indeed officially and legally a bicycle.

And — with a sales pitch as understated as the operating whirr of the vehicle’s motor — White adds that all sales proceeds at Princeton eBikes after store expenses benefit the Boys & Girls Clubs of Mercer County. 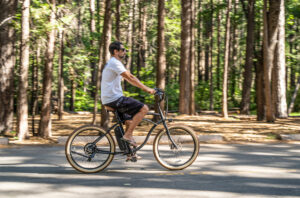 Often customers come into our shop wondering if they will get the exercise they want using an electric bike, as people typically are looking for a way to start or continue exercising.  More and more research is being done as electric bikes become more popular and many studies have shown that ebikes improve riders’ fitness by increasing people’s likelihood of riding and encouraging people to ride longer.  In addition, while ebikes provide the extra push when needed, they still require effort.  Read more about ebikes and fitness here.